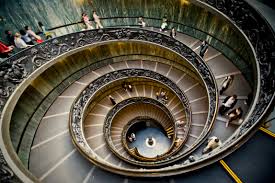 The double helix staircase in the Vatican Museum, shown in the photo above, was designed by Giuseppe Momo in 1932. The double spiral design allows people ascending to avoid people descending, which permits uninterrupted traffic in each direction.

Spiral designs can add an element of movement and fluidity to the static form of a building with it’s stable foundation. 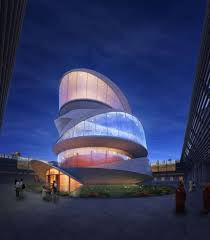 This Buddhist temple, shown above, in Taichang, China represents a fundamental Buddhist belief in a progression that leads to reincarnation. The spiral design has a beginning, a middle, an end and a sense of renewal and new beginnings. 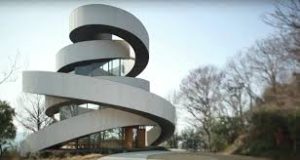 The wedding chapel, shown above, designed by Hiroshi Nakamura, is located on the grounds of a luxury resort in Japan. The building is comprised of a double helix that gives a visual sense of one spiral ascending and the other descending.

The spiral design, shown in the photo below, used by architect Frank Lloyd Wright for the Guggenheim Museum in New York City, allows art to be viewed as the museum guests walk up the gentle slope of the continuous ramp. 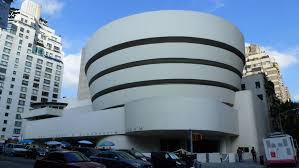 The design is said to resemble a chambered Nautilus shell as one continuous space freely flows into another. Wright thought that “…..geometric forms suggest certain human ideas…” and the spiral suggested the organic progress observed in nature.

In the section titled “Spirals in Botany”, we introduced the topic of phyllotaxis which refers to the pattern of leaves spiraling around the stem of a plant. This enables the plant to maximize the use of sunlight and rainfall by minimizing the blockage of sun and water by the leaves above. 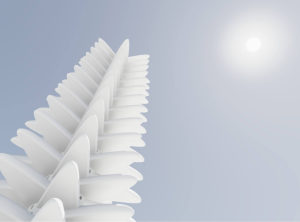 The Iranian architect, Saleh Masoumi, adopted this phyllotactic pattern in the design and placement of balconies on a high rise building. In phyllotactic towers, each unit around the building’s central core, can be constructed with varied vertical and horizontal distances to maximize the amount of fresh air and sunlight. In this way, individual units cast the least possible amount of shadow on each other due to the phyllotactic pattern, similar to the way the leaves on a plant do.